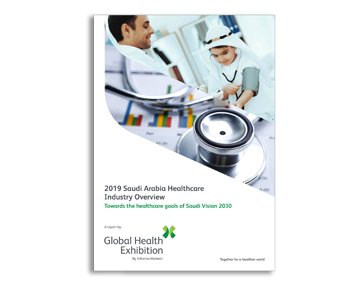 Towards the healthcare goals of Saudi Vision 2030

A report by Global Health Exhibition

Healthcare remains a top priority for the government in the Kingdom of Saudi Arabia (KSA), and there are enormous opportunities for growth in this high-potential business sector.

In line with the government’s Vision 2030 and the National Transformation Program (NTP), the Ministry of Health (MoH) is expected to spend close to US$71 billion over five-years ending in 2020.  According to US-based consultancy Aon Hewitt, the healthcare sector in KSA is expected to grow at a compound annual growth rate of 12.3% by 2020. There is also a significant rise in population with an increase in those over the age of 60 years, as well as the adoption of mandatory health insurance in the country.

Increasing the availability of a skilled workforce in healthcare is also emerging as a significant focus for the Kingdom. Major efforts are underway to provide educational and training facilities for doctors, nurses and paramedics through the expansion of new medical colleges.

The 2019 Budget For Healthcare

In a review of KSA’s 2019 budget and recent economic developments, KPMG has highlighted that the healthcare sector holds the third largest share of 15.6% in the budget expenditure of 2019. The budget allocation for the sector has grown by 8% to reach SAR172 billion in 2019, as compared to SAR159 billion in 2018.

Public spending on the healthcare sector is largely channeled towards new initiatives, such as increasing the life expectancy, reducing obesity and localisation of pharmaceutical manufacturing. The government is also diverting the funds towards creating a robust healthcare infrastructure by building new hospitals.

Healthcare is one of the main focus areas of the Kingdom’s Vision 2030 and the National Transformation Program. According to a report by Knight Frank, the main goal of the Vision 2030 is to diversify the economy away from hydrocarbons and achieve greater participation of the private sector by encouraging both local and international investments in several key industries such as healthcare. Privatisation of government services is expected to help meet the goals set out in Vision 2030 to increase the private sector’s contribution to GDP from 40% to 65% in 2030.

The NTP, which was developed to help fulfill the Vision 2030, has identified a number of key targets to be met by each government body by 2020. The Kingdom’s healthcare plan under the NTP has placed the sector on a fast trajectory to privatisation and growth over the coming years.

Privatisation is seen as a key focus area in the Saudi Vision 2030 and the NTP. As outlined by Knight Frank, the strategic objectives stated for healthcare in the NTP include:

NTP targets for the ministry of health for 2020 include:

Source: Healthcare In Saudi Arabia Opportunities In The Sector, May 2018, Knight Frank

In terms of supply, both private and public hospitals in KSA provide almost the same services; however, what differs is the capacity, quality, waiting time and most importantly, efficiency. As outlined in a recent research paper by Al Rajhi Capital, private hospitals provide a range of quality services to their patients including backup analytics, with a full medical experience but at a high cost.

The authors of the paper believe that this supply dynamics may change in the long run as the government is encouraging the private sector participation in the healthcare sector as the public sector’s role is gradually transitioned to becoming more of a regulator rather than as a provider of healthcare facilities, as highlighted in the NTP and the privatisation plan. 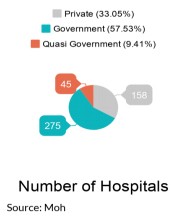 For Saudi citizens, the demand for healthcare services through private hospitals focuses more on treating medical cases such as seasonal illnesses, minor fractures, delivery surgeries and cosmetic treatments, largely on the back of the pool of experienced doctors, coupled with lesser waiting time. On the other hand, the importance of government hospitals is mostly for the treatment of severe medical conditions, for an example, Cancer, Internal Medicine and Ophthalmology. Nonetheless, those, who can afford the treatment, either cash or insurance coverage, prefer to go to private hospitals, the paper outlines. 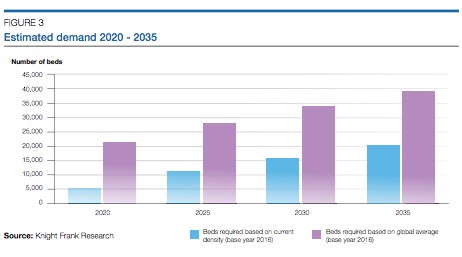 With life expectancy of both males and females on the increase, Colliers International expects this to create demand on long-term care (LTC) facilities, focusing on geriatric related care, rehabilitation and home healthcare services.

The Rollout Of Mandatory Health Insurance

KSA began implementing the mandatory unified health insurance scheme in July 2016, with the system fully in place in 2017. According to Knight Frank, the rollout of the Mandatory Health Insurance (MHI) to private sector employees in Saudi Arabia took place in various stages.

Source: Healthcare In Saudi Arabia Opportunities In The Sector, May 2018, Knight Frank

According to the Council Of Cooperative Health Insurance (CCHI), which is an independent government body built to regulate the health insurance in KSA, all KSA employers in the private sector are required to use one health insurance policy as of 1 July 2018 to cover their Saudi and non-Saudi employees and their dependents.

The new regulations are expected to add another two million people to the overall number of insured persons by the end of 2019. 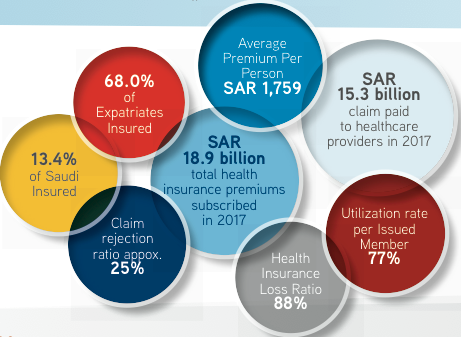 The recently introduced Medical Device Interim Regulations has made the Kingdom a regulated market for all types of medical devices and all manufacturers wishing to supply a medical device within KSA require Saudi Food & Drug Authority (SFDA) Market Authorisation.

Why Invest in KSA?

According to Colliers International, the key factors that make KSA’s healthcare market attractive are:

The healthcare sector in the Kingdom has witnessed collaborative progress over the years and, as a result, industry experts foresee a significant upward trend for the industry in the next three to four years.

According to analysis by Colliers International, the following opportunities exist in the KSA healthcare sector:

Royal Philips, a global health technology firm, has announced it has teamed with the KSA MoH to provide a cardiovascular information system (CVIS) across multiple facilities. Under the Taji project, patient medical information will be available on demand at the point of care in each one of the connected hospitals to help improve quality access to cardiology care managed by a network of specialists.

In 2018, it was announced that the KSA MoH would establish a holding company and five regional companies under plans to privatise the healthcare sector. Plans will allow full foreign ownership in the health sector, so the ministry will become a regulator and not a service provider. The Kingdom eventually plans to privatise 290 hospitals and 2300 primary health centres by 2030.

In 2019, NMC Health finalised a joint venture agreement with Saudi Arabia’s General Organization for Social Insurance that includes up to SAR6 billion of investments in the Kingdom over a five-year period. The joint venture will acquire and develop facilities with a capacity of up to 3,000 beds and employ up to 10,000 full-time and part-time employees.

GE Healthcare has announced a partnership agreement with Tatweer Medical Co., an investment arm of Tatweer Holding, to develop an advanced diagnostic facility in what is expected to become one of the largest specialised private medical campuses in the Kingdom. The Medical Village project, announced in 2018 and set to open in 2020 near Riyadh’s Diplomatic Quarter, will host seven specialised hospital buildings with more than 900 beds and 33 stand-alone medical centers delivering high-quality care across all areas of specialisation.

Healthcare In Saudi Arabia Opportunities In The Sector, May 2018, Knight Frank.